While directing United Airlines Flight 1977 to land at O’Hare Airport the morning of Dec. 30, an air traffic controller relayed to the crew what other pilots had apparently reported after touching down: “Braking action good.”

In other words, even with snow, and temperatures in the mid to high 20s, the runway surface was believed to be in good enough shape to successfully apply the brakes.

But the Boeing 737, arriving from Seattle with more than 160 passengers, ended up sliding off the end of the runway, records show.

“1977 has departed the end of Runway 27 Right,” one of the pilots said, according to audio transmissions recently obtained by the Better Government Association. “Be advised, braking action was nil” – meaning the tires weren’t catching on the pavement very well, a sign of slippery conditions.

Nobody was hurt, and the incident remains under investigation by the Federal Aviation Administration, which refused to discuss the possible cause of the runway “excursion” or “overrun” and two other relatively minor incidents since then that also involved planes reportedly sliding off O’Hare runways. FAA officials said they would wait to comment until their investigations are complete.

The Chicago Department of Aviation, which operates O’Hare and Midway airports and is overseen by Mayor Rahm Emanuel, also wouldn’t get into details, except to insist city snow-removal crews were out in force at the time of the three runway incidents. Aside from Dec. 30, they occurred Jan. 22 and March 1 on the same 7,500-foot-long runway – 9 Left/27 Right, which opened in 2008 as part of O’Hare’s massive expansion and reconfiguration project – amid fairly similar weather conditions. A plane also slid on a taxiway on March 1.

An aviation department spokesman, Owen Kilmer, said “any excursion is undesirable,” but added: “The recent excursion events had many factors involved other than snow removal activities that we are unable to discuss due to pending investigations.”

The BGA obtained a memo, written by O’Hare’s north airfield snow-removal coordinator, indicating that as the Flight 1977 overrun occurred around 7:40 a.m. on Dec. 30, city crews were waiting to conduct a “friction” test on the landing strip and, if necessary, clear away snow or ice.

In fact, the friction testing crew, sitting on a nearby taxiway readying to gauge the slickness of runway pavement, radioed for permission to drive down the strip “to go to the aircraft for any assistance,” according to the memo, which was obtained from the aviation department in response to an Illinois Freedom of Information Act request. 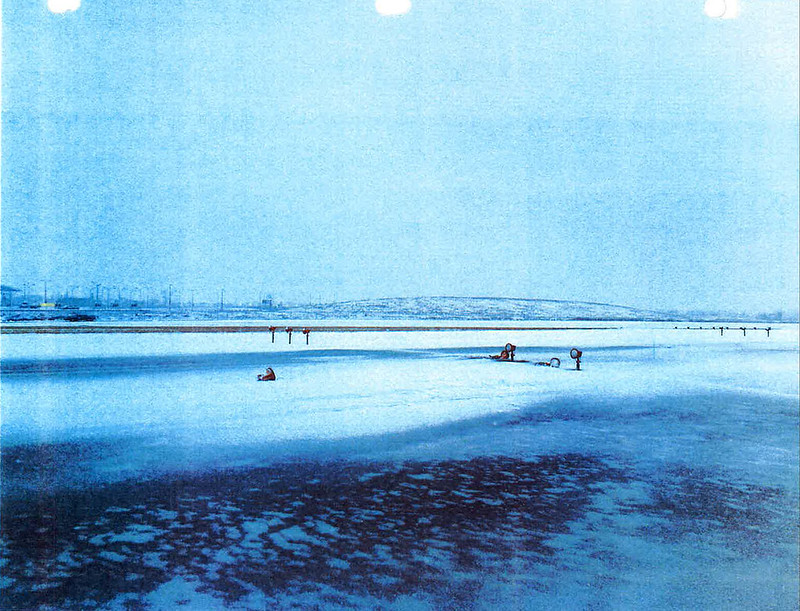 Photos of Flight 1977 overrun obtained from Chicago Department of Aviation.

Kilmer said via email that pilots “had reported good braking action” on the runway prior to Flight 1977’s arrival.

“Nevertheless, the [aviation department] is required to make a visual inspection of the runways and taxiways once a day,” Kilmer said. “Further, during snow/other severe weather events, a visual inspection is done within every two-hour period, which is what was being done that day.”

City crews were “also preparing to take a friction test of the runway to corroborate the pilots’ assessment, as well as to update the Notice to Airmen . . . for pilots operating in and out of O’Hare. The runway inspection was part of the typical operating procedure during snow events.”

The BGA also found there were two more incidents at O’Hare on Dec. 30 within hours of the Flight 1977 overrun that may have been weather related.

A business jet maneuvering on the ground “inadvertently crossed a hold line” for a different runway, prompting an approaching flight to be “sent around by air traffic before it could land,” according to an FAA spokeswoman, who said the ground pilot later relayed the pavement marking “was covered by snow, and could not be seen.”

Kilmer, however, said city crews were sent to inspect the “runway/taxiway intersection” and found signs and pavement markings “all fully visible.”

The FAA wouldn’t provide identifying information for that plane, so the aircraft operator couldn’t be reached.

Meanwhile, two city snow trucks collided at O’Hare later in the day, sending one worker to the hospital, records show.

The trucks were in a “staging area” on the north side of the airport when it “is believed that the snowplows may have slid into each other,” Kilmer said, adding the employee was not seriously hurt.

As with the Flight 1977 incident, the crew of United Airlines Flight 734 was told by an air traffic controller that runway braking appeared to be good when the aircraft landed on the same runway around noon on Jan. 22 with more than 180 people on board.

But radio transmissions show problems after the jet landed.

A pilot responded, “No we’re not going to be able” and later reported, “There’s nil braking action here,” meaning little or none, and then, “We’ll need a tow.”

City records say the plane “slid off the runway.”

Pilots often tell air traffic controllers, who work for the FAA, how their landings went, and the controllers then relay runway conditions to inbound pilots. City crews clear the pavement as needed, coordinating with the FAA.

In one of the March 1 incidents, a smaller jet with two pilots aboard “slid off the end” of 9 Left/27 Right, according to the FAA, while minutes later an American Airlines flight slid on a taxiway.

Representatives of the airlines involved in the O’Hare incidents declined to comment beyond confirming basic details. 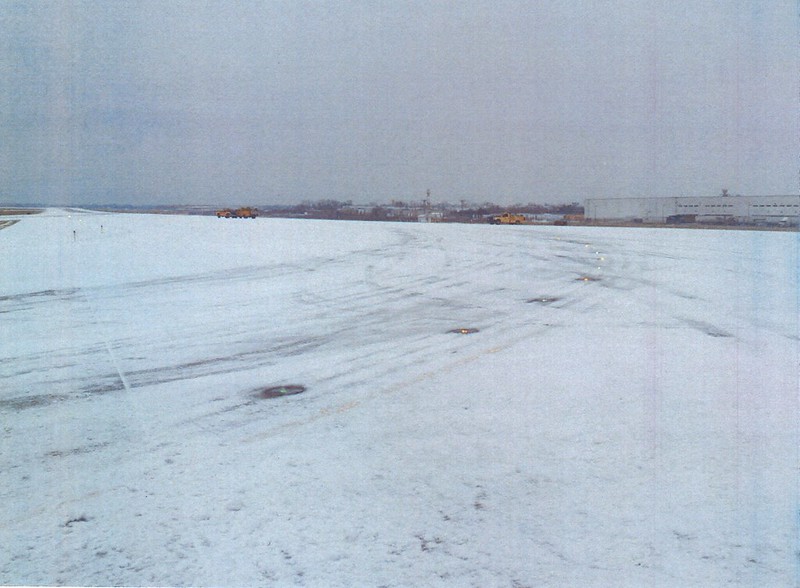 Photos of Flight 734 overrun obtained from Chicago Department of Aviation.

While the FAA regulates U.S. airports and airspace, the National Transportation Safety Board investigates serious or potentially serious aviation accidents and incidents.

The recent O’Hare incidents weren’t considered alarming enough for the NTSB to get involved or to even catalogue, according to records and interviews.

NTSB records show there were nearly 200 “runway excursion and/or landing area overshoot accidents” in the U.S. in 2015 and so far in 2016, including three in Illinois at other, smaller airfields.

The FAA has yet to tell the BGA how many total runway excursions there have been at O’Hare and Midway airports in recent years.

This much is clear: The topic has generated a fair amount of research and concern nationally.

A 2009 Flight Safety Foundation report includes a litany of “risk factors” for runway overruns, including pilots touching down too fast or far, “ineffective braking” and “runway contamination.”

Weather can play into that, and one commercial pilot interviewed by the BGA noted weather conditions can change rapidly at O’Hare, while another expert, Embry-Riddle Aeronautical University professor Bill Waldock, said keeping runways totally clear in winter is “a constant battle.”

Whatever the FAA ultimately finds in its investigations, “security and safety are the first priority,” Kilmer said, adding “if there’s any evidence of deficiencies in this area,” Chicago Aviation Commissioner Ginger Evans, a mayoral aide, will “take immediate action to correct it.”

Robert Herguth oversaw investigative projects at the BGA from 2010 to 2016. He is a former assignment editor, assistant metro editor and reporter at the Chicago Sun-Times, and the former managing editor of the (Milwaukee) Business Journal.

Investigative journalism for a better government.