In the midst of a chaotic, surreal campaign season and one day following the first presidential debate, civility and public discourse set the tone for the conversation between two political titans at the BGA’s Springfield Luncheon on Tuesday, September 27.

As the featured guests in “Elections 2016: Candidates, Chaos and Consequences,” former Governor Jim Edgar, a Republican, and former University of Illinois Board Chair Chris Kennedy, a Democrat and potential gubernatorial candidate in 2018, offered a breakdown of the current state of politics in Illinois and the nation. From the race for the White House to reform here at home, they analyzed it all in a conversation with Andy Shaw, BGA President and CEO, before an audience of about 185 in Springfield’s President Abraham Lincoln DoubleTree hotel.

The event replayed on WMAY 970-AM and 95.7-FM that evening and is available by podcast here: http://www.wmay.com/episode/podcast-candidates-chaos-consequences-w-better-government-association/.

The thought-provoking examination by both Edgar and Kennedy found common ground on a range of issues, including that neither would vote for Republican presidential candidate Donald Trump. Edgar, a Republican governor from 1991 to 1999, said the November 8 election will be the first time he will not vote for the GOP candidate, although he wouldn’t disclose whether he would vote for Democrat Hillary Clinton or a third-party candidate. “It’s a secret ballot,” he said.

Despite not voting for Trump, Edgar said he still believes Trump could win the election.

Kennedy predicted Clinton will win the November election, as Trump would not be able to win Electoral College votes. But, speaking directly to the Springfield audience, Kennedy said the well-informed, engaged individuals who represent the “establishment” of both political parties need to listen to those who are disengaged and “raging.”

“The American dream of rising from rags to riches was the promise of our country—the place where anyone could make it,” Kennedy said. “And people don’t believe that anymore. They’re upset. They’re angry. And they’re willing to destroy everything we have if we don’t fix that. That’s the message of this election.” 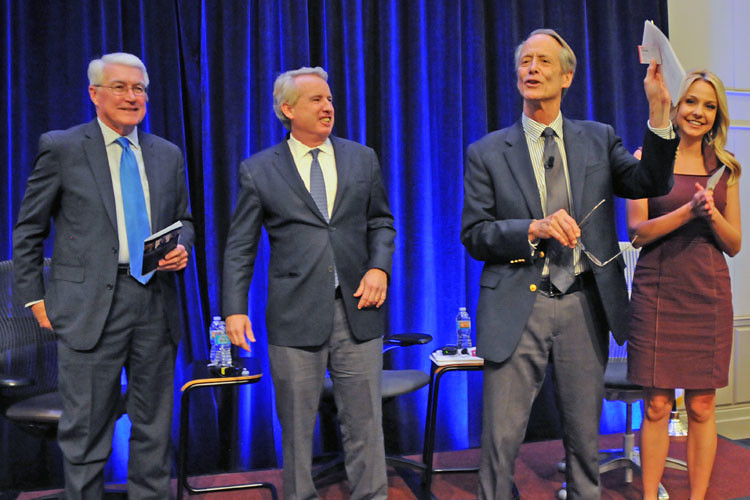 Both Edgar and Kennedy agreed this election season to be a critical moment in our country’s history.

In Illinois’ history and the context of state-level races November 8, the lack of a state budget is most critical, they agreed.

“Why should we invest in the only state that doesn’t have a budget,” he said, reciting perspectives he hears from investors.

Neither Edgar nor Kennedy believed good government election reforms—including the Independent Map Amendment to reform the way legislative districts are drawn in Illinois— would alone solve Illinois’ chronic problems.  Edgar also said rewriting Illinois’ 1970 Constitution would be unwise at this time. “There’s nothing wrong with our Constitution,” he said. Rather, we need to elect better people, he quipped.

The Springfield luncheon was held just as news broke that a federal judge blocked same-day voter registration on Election Day. The BGA was part of a group of voting rights advocates that urged the U.S. District Court Judge Samuel Der-Yeghiayan to keep the Election Day Registration, which has been in place in Illinois since 2014.

The BGA was disappointed in that ruling. “Too many Illinois residents are disengaged from the democratic process, and we pay a high price for that,” Shaw said. “We need more engaged voters, not fewer.”

The luncheon was the first fundraiser in Springfield since the BGA’s three-year effort to establish a more permanent and prominent presence in the capital city. The 12-member Springfield Advisory Board, chaired by Cindy Davis, co-owner of Resource One office furniture in Springfield, hosted the luncheon and urged the audience to get engaged.

“We are all affected by Illinois’ compounding challenges,” Davis said. “We—as individuals and as a community—can be informed and should demand a better government.”

The event raised more than $20,000 towards the Springfield efforts, thanks in part to the many sponsors, particularly presenting sponsor Isringhausen Imports.